At the official opening in March of Richgro’s new AD plant in Western Australia, Managing Director Geoff Richards looked out with immense pride and satisfaction.

In the company’s centenary year, the new £3.5M AD plant represents a true cornerstone - not just for the family-owned and run Richgro, but for Australia as a whole.  Geoff’s grandfather, Arthur Richards had arrived in Perth one hundred years ago with just £5 in his pocket, but soon set up a thriving grocers and general merchant’s store.

"Our AD plant sends out a clear message", says Geoff, "that we can keep our country clean, green and forever the lucky country", which for many Australians is a phrase that has a very special resonance.

Prior to the creation of the UK AD & Biogas event, Geoff Richards had visited some waste and recycling trade shows in Europe, realising very early on that with Jandakot’s isolated location, the so-called ‘black box’ package solution was not going to be right for Richgro.

Natural Solutions
"We believed in using food waste and not growing crops to be used as fuel”, added Geoff.  "For me it is very important that we find as many natural solutions as possible to the problems that confront the world – and the production of food is one of the biggest.  I also wanted to steer well clear of a boxed solution because I needed to know what would be going on inside our AD plant – understand it and be able to operate it in our part of the world.  There was no way I was going to put us in a situation where we didn’t have spare parts and back-up.  We had to have a very robust plant".

Wanting to form a closed loop, with potential to utilise heat and CO2 produced on site, Richgro (with annual electricity costs in excess of £200,000 pa), also wanted to use digestate to blend in with existing Richgro product to improve nutritional and breakdown characteristics, and market the new by-product as a bio-fertiliser.

It was only when he came to ADBA’s show in Birmingham that Geoff said he could meet those at the very heart of AD industry.

"Unlike other exhibitions, it was extremely focused with a very good structure and I really enjoyed the opportunity to discuss my ideas with those in the know.  What was pleasantly surprising when I met Hugh Vaughan from Landia is that I wasn’t really sold to.  Some companies want to sell you everything in their product range, even if they know it’s not the best solution, but I was given straight, honest answers to my questions".

One of the original Directors of ADBA, Landia’s Hugh Vaughan, recalls:  "I thought it was quite novel to have somebody all the way from Australia visit our stand in Birmingham – and I could see straight away that this was a special opportunity for us and our fellow ADBA members to help make this project happen by working together".

Landia were already working with Biodome Asia in Malaysia (the regional headquarters of UK-based Kirk Group), where 20 of its GasMix systems had been installed, so five months later a meeting was set up with Richgro at what was not too far off a halfway point.  Geoff Richards and Hamish Jolly (Director of Biogass Renewables, also based in Jandakot) met Matthew Dickinson from Biodome Asia, plus Hugh Vaughan and Steen Larsen from Landia, to examine the best possible options as they drew up a draft design for the Richgro plant.

Geoff Richards continued:  "First in Europe and then in Malaysia, we saw how the UK technology could survive in very harsh environments, from snow to extreme heat.  We also had to be mindful of the fact that here in Perth, we have previously had earthquakes.  I returned to the next UK AD & Biogas with Hamish Jolly where we split up at the start of exhibition, then met at the end to compare notes.  We then drew up our final list of those companies we believed we could move forward with as long-term trusted suppliers".

One of the main reasons we chose Landia’s GasMix
"We’ve always taken the pathway of innovation and adapting technology", continued Geoff, "so it amazed me in the US and Canada that they were still producing concrete plants half buried in the ground and were largely using unreliable mixing systems that regularly failed.  This model wasn’t for us at all.  We needed a far more modern, cost-effective and practical plant that we could easily maintain, which is one of the main reasons we chose Landia’s GasMix.  For access it is like an outboard motor – very easy to get at.  Our second visit to England was the real turning point.  The English tell it like it is, which we really like.  We knew we were on the right path. The ADBA members in the UK understood the reasons why for example, we wanted ownership of our plant dedicated software - and that they as a group of companies could make their equipment combine to produce the results we needed.  We were also determined to create a clean input process, with a clean output and a fully closed loop."

With a team now in place, Biogass Renewables assisted Richgro in gaining approval for the AD plant from Western Australia’s Department of Environment Regulation, before securing £1.1 million for the project under a debt funding arrangement from the Clean Energy Finance Corporation – plus a further £800,000 in grants from the Australian Government’s Clean Technology Investment Program and the Western Australia State Government.  Payback (before grants) on capital is expected within four years.

As agreed, ADBA members Landia, Biodome Asia, Edina and Uniflare all worked very closely together to co-ordinate delivery and installation for Biogass Renewables – although first a low voltage grid connection had to be overcome.  A major upgrade to high voltage was required so that Richgro could import sufficient energy as well as export up to 2MW of power.

Operational now since January, Richgro has begun generating income from the gate fee for diverting waste from landfill, as well as from the digestate as a biofertiliser by-product.

Around 100 tonnes of food and liquid waste (approximately 35% dry solids) is trucked in each day to the Jandakot plant from supermarkets, abattoirs, fast food chains, breweries and soft drink manufacturers.  The facility has a de-packaging system to remove contaminants in order to enhance the digestion process with a pumpable feedstock. Where possible, leftover packaging is sent for recycling, even to the extent of waste plastics be re-used. The feedstock is then put into a blending tank to ensure that the ph balance, proteins fats and other organics are in a good ratio to aid digestion, which is checked by the on-site laboratory before being placed into a buffer tank. The buffer tank acts as a store for the organic matter for the intermittent feeding of the digesters throughout the day.

This organic matter is then fed into two 2,500 cubic meter capacity Glass fused to steel digesters which have Biodome double membrane gasholders on the top, supplied and constructed by Biodome Asia.  In addition, Biodome Asia also supplied the 350m³ Open-topped Blending Tank, a 350m³ Feeding Tank with steel roof and a 500m³ Digestate Storage Tank, also with steel roof.

The feedstock that has passed into the primary digester has its own external heating system to maintain the temperature of the digesters, which utilizes the co-generated surplus heat from the Edina gas engine to maintain a temperature of approximately 36oC.

Digester mixing is with Landia’s externally-mounted GasMix system, which Richgro brought in not only for it being easy to service, but for its enhanced gas yields and reduction in volatile solids. For pre-treatment, GasMix also reduces viscosity by 30% (as tested by the University of Aarhus in Denmark) and is energy-efficient, usually only needing to run for 7-10 minutes in the hour, so the consumed power is just one-sixth of the installed power.

The gas is then cleaned up utilizing a Uniflare flare stack before being turned into energy via an Edina CHP engine with electricity being consumed on site as well as exported to the grid. The heat is used in new on-site greenhouses for helping to grow blueberries (a brand new revenue stream for Richgro), as well as maintaining the plant’s temperature.

Water and digestate are used within the composting facility, making considerable savings and massively reducing the carbon footprint of the Richgro company, whilst also enhancing Richgro’s market-leading brands.

The Richgro site sets a great example
Speaking for Biodome Asia, Matt Dickinson, Operations Director (at the time of the build) added:  "I feel privileged to have been part of helping bring this extraordinary plant together.  It is so much more than a typical AD plant - and with its emphasis on zero waste the Richgro site sets a great example for future projects in Australia and for the rest of the world.  From utilising heat for greenhouses as well as waste plastics, recycling metals, digestate and precious water for the composting plant, this Richgro plant ticks all the boxes for zero waste.  It’s brilliant".

"We are privileged to be part of such an ambitious and unique project.  From our initial discussion with Richgro in 2013, we have been liaising with them and our fellow ADBA members throughout the project, using our vast experience and expertise within the biogas industry to deliver a support solution befitting for their requirements, long term objectives and strategic goals."

Following the success of the installation and performance of the MWM biogas CHP, Richgro have since placed an additional order for a second MWM TCG 2020 V12 biogas CHP engine, due to be commissioned in December 2016.

Everything is managed from a Biogass Renewables control room, which can be operated remotely and allows full automation of the facility.

Biogas is captured from the digester, chilled down to its dew point to remove moisture, before boosting to a containerised Edina co-generator, which produces heat and power through a reciprocating high-efficiency engine.

Energy is now being harnessed by Richgro’s operations to power all of the site’s equipment, with the surplus exported into the Western Australian electricity grid. Over a 20-year lifespan, the plant is also expected to save 142,722 tonnes of carbon dioxide emissions, as well as having eliminated its hefty electricity costs.

The best feeling in my entire career
Less than two months since commissioning, the Richgro facility’s processing of mixed commercial and industrial food waste was giving a biogas yield of 138m3/ton.  The process capture efficiency was recorded at 91%, with one ton of food waste generating 415kWe and 435kWth from the single onsite CHP, which is running at 100%, producing up to 1.2MW.

Landia’s Hugh Vaughan added:  "From my first meeting with Geoff at UK AD & Biogas, to the first drawing – then seeing this immaculate plant up and running on the other side of the world with UK technology is the best feeling in my entire career".

"Landia, Biodome Asia, Edina and Uniflare have proved just what can be achieved with our technical skills, knowledge and enthusiasm to bring about such a shining example of an AD plant".

Geoff Richards concluded:  "In our centenary year, creating this first for Australia is something that we are extremely proud of.

"Together with the Australian Organics Recycling Association (AORA) and the Australian Government we are very pleased that we took on this major project.  For the long-term good of our country we feel it is right to diversify, with a robust AD plant built from the very best UK technology that offers a real, joined-up environmental solution". 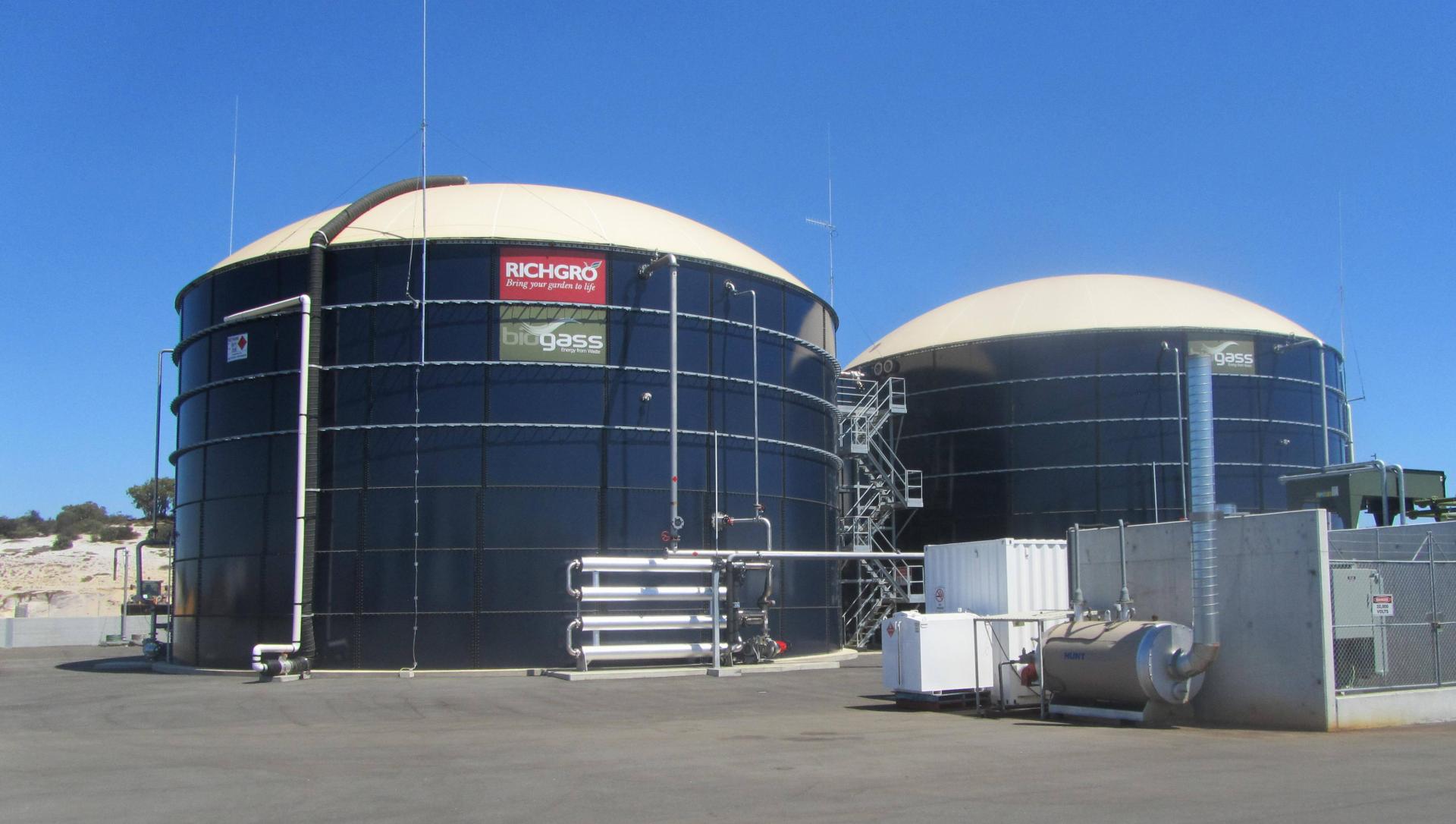 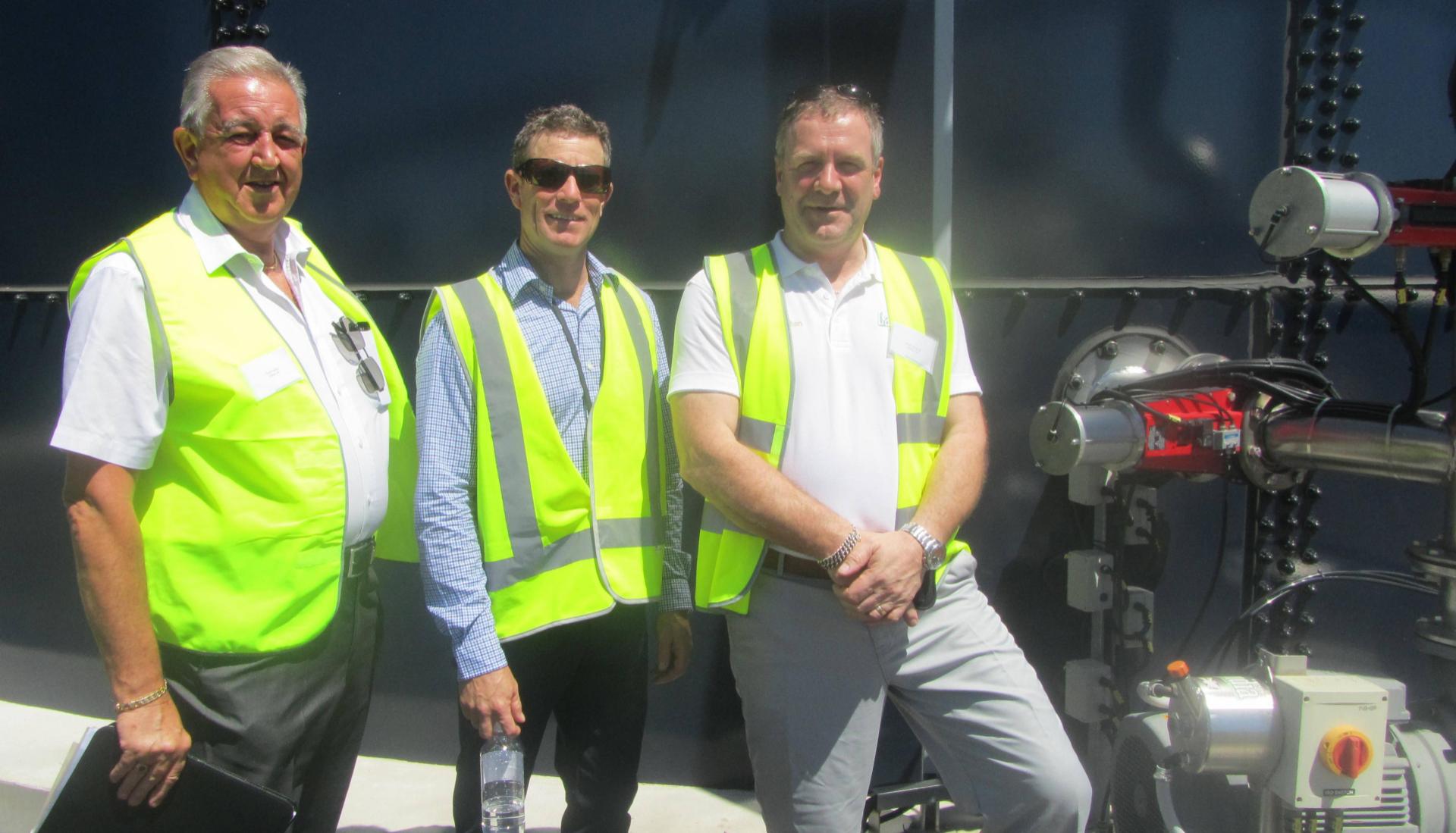